skip to main | skip to sidebar

Are we not Professionals?

Are we not professionals?

I’m happy to be licensed to substitute teach by the Teacher Standards and Practices Commission until July 20, 2020. License requirements are reasonable enough: fingerprinting, civil and criminal background checks, completing requisite educational levels, and continued professional development. However, TSPC has instituted something else: a “Statement of Professionalism.” 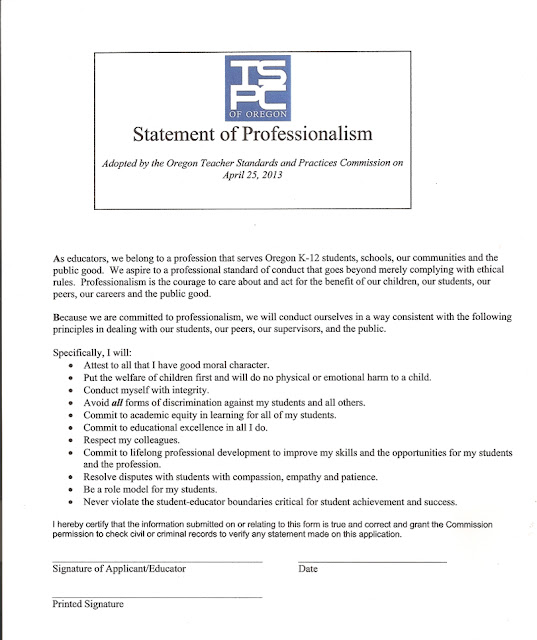 They adopted it on April 25, 2013, but aren’t saying who gave birth. It doesn’t look like anything we professional educators would conceive. The “we” they speak of is purported to be “educators,” and it’s true that self-important bureaucrats can teach us a lot.

Whoever they are, they’ve been authorized to decide if we work or not, based on requirements even they have difficulty discerning. This analysis could arbitrarily be determined to violate my agreement to the above statement, which might be reason to revoke my license. In reality, protesting this unprofessional requirement is one of the requirements of it: “Be a role model for my students.”

“Merely complying with ethical rules” isn’t enough for us professional educators: we aspire to a standard of conduct that goes beyond that lowly level. We’re not just ethical, we’re... whatever’s better than that. If we don’t know what’s better than behaving ethically, they spell it out for us.

We signatories are expected to “Attest to all” that we “have good moral character.” Maybe social media postings are enough, the method is left open. We could tweet about our moral character, though that wouldn’t reach “all”. Need some translations here.

Perhaps standing on a freeway onramp with a cardboard sign: “Will attest to good moral character for TSPC. God bless,“ would reach more people.

Luckily, it doesn’t specify we actually have good moral character, just to attest that we do. A religious exception might be possible if we consider pridefulness to be one of the seven deadly sins.

Children’s welfare is a high priority for all teachers, so do we really need to specify that we won’t physically or emotionally harm a child? May as well promise not to steal equipment from the school while we’re at it—that’s so unprofessional.

Conducting ourselves with integrity becomes problematic when to do so would mean not getting our license renewed.

I will “Avoid all forms of discrimination...” “all” is in bold italic but it wasn’t underlined and in caps, so maybe there’s room for discriminating at times, like, who gets to go on the field trip or has earned phone privileges.

Avoiding all discrimination includes “all others,” so maybe some teachers will finally get a date with colleagues who’ve been discriminating against them all year.

I will “Respect my colleagues.” It doesn’t say, “Treat my colleagues respectfully,” which would be reasonable. We are to certify that we will actually respect them, even if we feel they haven’t earned it. Trouble is, respect is like love: it’s an emotion we can’t force. Besides, how can I respect my colleagues who unquestioningly sign whatever statement on ethics is required of them, as if clicking “accept” terms and conditions on a new app? I’ve lost some respect for myself by prioritizing my license to teach over acting with integrity and refusing to sign. We should at least be allowed to stop respecting some colleagues on weekends.

No, I’m not committed to “lifelong professional development to improve my skills and the opportunities for my students and the profession.” I aspire to outlive my teaching career, and Professional Development Units aren’t in my retirement plans. Yes, I certified with my signature that I would, but I was under duress. I tried to opt out with my first application submission:

I respectfully request an exemption from signing the “Statement of Professionalism” form. To do so would not be conducting myself with integrity, one of the principles I would be committing to by signing, if I hadn’t already made that commitment.
Permission to check civil and criminal records is granted on page four, so another signature isn’t needed for that.
If this is not acceptable, I am willing to reword the statement so that it retains the spirit and intent, but is something I could, in good conscience, agree to by signing.

We can only speculate on the motivations for this “legal document.” Perhaps it’s an attempt to enhance our image of professionalism to the public, or to provide additional guidance on top the extensive educational development we’ve accomplished to qualify for a teaching license, or simply to reinforce dominance. Whatever the rationale, adding this unnecessary page to an otherwise thorough and effective, if cumbersome, process disrespects all of us.

If we were truly considered professionals we wouldn’t be subjugated by a list of poorly worded, nebulous, and/or impossible demands disguised as professional standards.

License renewal is now online, so we only have the options of either clicking "Agree and Continue" or not renewing.

Employees can legally be fired for violating the terms of their employment, like the man who lost his job for drinking a competitor’s beer. But these are based on specific behaviors, not on a state of mind or hazy directives such as “Commit to educational excellence in all I do.” I always do my grocery shopping and housecleaning with a commitment to educational excellence, but I give it a rest when I’m playing nude croquet with my homies.

At the risk of sliding down to a slippery slope argument, I wonder how far this could go. TSPC administrators of the future could decide educators should defend the constitution from all enemies domestic and foreign, and always tip at least 15%.

Historically, teachers’ personal freedom outside of school was restricted in ways we now consider outrageous. This Statement of Professionalism feels to me like a step backward toward those times. It should be eliminated or at least re-written with input from those required to agree to it.

An important note: this isn’t a criticism of the personnel at TSPC who are understaffed and under appreciated. I’m told by those with first hand experience that in person they’re very courteous and helpful. They aren’t the source of the required statement, which has the fingerprints of authoritarian hubris.

I must admit that this demeaning requirement pales in comparison with so many injustices in the world. However, if we let each additional minor injustice slide without comment, they’ll add up to serious subjugation. We might wonder how we got to that state.

I don’t expect to effect a change by bringing this to the attention of the few who read this, but I think this ridiculous statement is ripe for some playful deconstruction.

Thank you for reading,
Barron